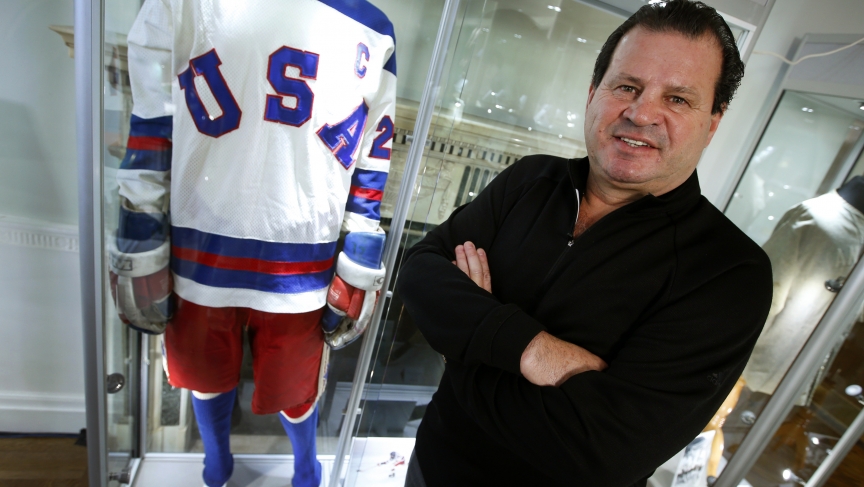 Of all of the sports figures I have interviewed, those I’ve thoroughly enjoyed speaking with are simply too many to mention. One of those figures, in particular, came last week when I had the privilege – nay, honour – of interviewing American hockey icon, Mike Eruzione.

While I did have a friend help me with my interview with Mr. Eruzione (thank you, Sylvie), it was nonetheless a wonderful experience. After all, just roughly two months shy of the 40th anniversary of Team USA’s historic upset of the Soviet Union in men’s hockey at the 1980 Olympics in Lake Placid, there was no better time to pick Mr. Eruzione’s brain, so to speak.

While I am not an American, nor was I born in 1980, this victory is actually my favourite sports moment – one that was made possible by the eventual game-winning goal scored by none other than Mr. Eruzione himself.

I had reach out to Boston University, Eruzione’s alma mater, thinking the Team USA captain wouldn’t get back to me for a while, if at all. To my delight, though, I checked my voicemail less than two hours later to discover a message from one Mike Eruzione. Now, while I can safely admit that, as a sportswriter, I possess the discipline to separate being a professional to being a fan (not that fans are unprofessional, but I’m going to go ahead and guess that you know what I mean). With that being said, though, I immediately called my fiancée to express my excitement that Mike Eruzione called me and that his voice was on my voicemail.

After composing myself of such excitement, I texted the Team USA legend and we had our interview set up.

From his stories to his friendly demeanor to his appreciation of having Boston Red Sox fans like myself in Toronto, speaking to Mike Eruzione was sheer joy – and why not? I was speaking to a man who had touched the lives of so many Americans from that cold February day in 1980 and beyond – regardless if they were die-hard hockey fans or, as Al Michaels put it prior to said game, if they “didn’t know the difference between a blue line and a clothesline”. After all, this game – and this victory – went well beyond the confines of a rink.

From the ongoing Cold War between the United States and the Soviet Union to the invasion of Afghanistan by the latter to the American hostage crisis in Iran, there was so much political backdrop to this game and to this rivalry that the list of ulterior motives to be invested in this game is simply much too long and detailed to summarize in a blog post. Even last week when I watch the 2004 movie “Miracle” for the hundredth-thousandth time, the goosebumps I get when Eruzione – portrayed by Patrick O’Brien Demsey – scores said game-winner and at the final buzzer are still just as massive and conspicuous as they were when I first saw the movie in theatres in early 2004.

While it may not have been completely accurate to the actual story, “Miracle” is nonetheless one of my favourite movies. When I watch it, I think of maternal grandfather, a New York native who proudly served in the United States Air Force; I think of my mother who grew up in the United States and always proudly sang “The Star-Spangled Banner” at every sporting event we went to; for my Uncle Doug, who also grew up there; for my Philadelphia-born paternal great-grandfather; for my cousins in San Jose and Houston; for my countless friends across the United States (especially you, Gerald); and for my fiancée, Shannon, who was born and raised in southern California – all of whom were, unlike me, alive when the Miracle on Ice happened.

As for my interview with Mike Eruzione, I cannot emphasize enough just how euphoric this made me feel. The accomplishment made me feel great, sure, but it felt even better discovering first-hand just how nice and genuine of a man Mike Eruzione really is with his absence of ego being all-too-conspicuous.

Some may call me crazy or weird for saying this but with my depression and anxiety, these types of interviews are just one of the things that quell said afflictions. Writing does this but hearing a great, poignant story from anyone, much less someone with Mr. Eruzione’s lineage and popularity, it’s humbling, to say the least, and I absolutely love the feeling I get from that.

So, I guess to stomp out more battles with depression, I have to write more and to seek more stories.

Hey, I have no issues whatsoever with that!